As the difficulty of mining continues to increase, bitcoin hash rates continue to set new record highs, and the dollar-denominated revenue generated by a single machine is decreasing. Managing the thermal exhaustion of a Bitcoin miner or ASIC is a critical part of a miner’s operations and maintenance. 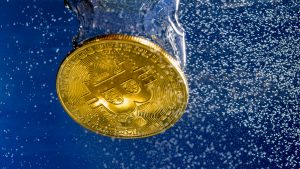 What is immersive bitcoin mining?

Immersion mining (mining with an immersion cooling system) is the practice of submerging bitcoin mining equipment in a dielectric fluid. Whether it is oil or engineered fluid, the goal is to manage heat exhaust, limit noise, increase throughput, etc.

The process of building and submerging a mining machine in an immersion cooling system is more complex than setting the same machine up in a rack with good airflow. But the core function is to cool the hash plates: the liquid running over them is circulated, entering through the pipes and exiting the tanks.

Immersion cooling is more effective than air cooling. Engineered Fluids claimed that air cooling consumes 40% to 50% of total setup energy usage, and the device’s onboard fans alone consume 5% or less of the total power. Miners who choose an immersion cooling setup might run a higher hash rate on each machine. Immersion cooling also does not require the miner to clean dust regularly, dirt, and natural buildup from the machine and immersion fluids can solve this problem.

Immersion mining also handles the heat and noise of the miner more effectively than an air-cooled setup. Unlike liquids, the difference is that air is not a very good conductor of heat While it is also possible to build an ASIC vessel with low or even no noise in an air-cooled setup, the immersion setup is much quieter.

Who should build an immersion cooling unit?

Air-cooled Bitcoin mining may not be sufficient for the ever-evolving, energy-demanding computers. The increasingly advanced chip design may ultimately require immersion cooling if air can’t feasibly handle the rig’s heat load. A single Bitcoin mining rigs and entire mining operations continue to push the limits of hashing efficiencies, immersion cooling may become the most meaningful method for miners to grow their total hash rates and reduce overall expenses.

An immersion cooling setup is ideal for miners. It is able to help to extend the life of their machines, control noise/heat as efficiently as possible, or push the miner beyond its original power rating, known as overclocking.