Immersion cooling, also known as liquid submersion cooling, is the approach of submerging computer components (or entire servers) in a conductive liquid (dielectric coolant) that has heat but no electricity. In today’s article, let’s go deeper into the new horizon of liquid cooling: 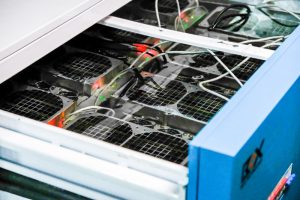 As we all know, liquid immersion is the conventional way to cool large power distribution components, for example, transformers. This way is still very rarely used for cooling IT hardware, but it is slowly becoming popular in innovative data centers around the world. IT hardware or servers cooled in this way do not require fans, and the heat exchange between the warm coolant and the cold water circuit usually takes place through a heat exchanger (i.e. a heater core or radiator).

In order not to interfere with the normal operation of the computer, the liquid used must have a sufficiently low electrical conductivity. If the liquid is somewhat conductive, it may be needed to insulate certain parts of the component that are susceptible to electromagnetic interference, like the CPU. Therefore, it is better to have the liquid as the dielectric.

Are immersion cooling and “water cooling” the same thing?

The costs of fluids for immersion cooling systems used to be higher than water cooling, but this has been changing.

A large variety of fluids are available for this purpose, the most suitable being transformer oil and other electrical cooling oils. Non-application oils, including cooking oils, motor oils, and silicone fluids, have been used successfully to cool personal computers.

The rise of immersive cooling and how we got here?

Electricity, efficiency, and sustainability are becoming areas of increasing concern for the data center industry. There are many factors contributing to this growth in importance, such as 5G, AI, and machine learning. The increasing use of these technologies is causing temperatures within data center infrastructure and IT equipment to rise dramatically. Data Centers are now looking for ways to efficiently cool their equipment while reducing their environmental impact and increasing their computing power.

What Types of Immersion Cooling Exist?
According to the characteristics of the coolant, we can classify the immersion cooling technology into the following 2 types. 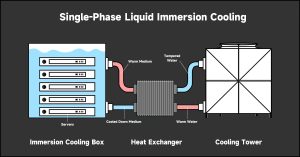 With single-phase immersion cooling, servers are installed vertically in a coolant bath of a hydrocarbon-based dielectric fluid similar to mineral oil.

Servers or other IT components are submerged in a thermally conductive dielectric liquid or coolant. The coolant never changes state, it never boils or freezes and always remains in liquid form. The coolant is pumped into a heat exchanger and the heat is transferred to a cooler water path. This technique uses an “open bath” because there is little risk of coolant evaporation. 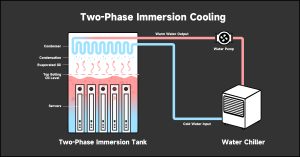 Two-phase Immersion cooling is a new type of cooling technology for data centers. In a two-phase immersion cooled system, electronic components are submerged into a bath of dielectric heat transfer liquid, which is a much better heat conductor than air, water, or oil.

For two-phase or even some single-phase immersion coolants, evaporation can pose a problem and the liquid may need to be periodically replenished or sealed inside the “bath’s enclosure”. What’s more, two-phase coolants are very expensive and it is unclear what effect their vapors will have on the person operating the bath.

Box Technology markets to the world’s data centers that can’t move their infrastructure to cold climates and still need to compete in the market.

It is also the perfect way for high-density applications such as cryptocurrency mining (Bitcoin, Ether, Ripple…) using any ASIC or GPU hardware.