What is a bitcoin mining farm?

Bitcoin mining farms and various cryptos consist of concentrating a large amount of mining hardware in one place and keeping it operational. In this article, we are going to let you know more about Bitcoin Mining Farms.

What is a Bitcoin Mining Farm?

A bitcoin mining farm is basically a space where bitcoins are generated. The cryptocurrency, on a large scale, uses specialized equipment, such as Bitcoin mining ASICs, to perform many calculations on data at the computer level. It is vital to remember that there is no specific concept to define how many mining devices a project becomes a mining farm, but as a general rule, we are talking about medium-sized projects.

Cryptocurrency mining is the process by which miners use hash or computing power to process transactions and receive rewards, in this case in the form of Bitcoin. In other terms, it is the process of adding new records of transactions to the blockchain as blocks.

Bitcoin requires a consensus mechanism to ensure that transactions agreed to by stakeholders are legitimate to prevent people from spending the same money twice. In that way, to achieve this, Bitcoin uses proof of work. Therefore, when a transaction block is completed, miners must compete to be the first to solve a complex mathematical puzzle or equation. After this is achieved, they generate a 64-character hash to validate the transaction, allowing the miner to generate bitcoins as a reward.

While in a traditional farm, plants are grown and animals are raised to produce products for human consumption, in a bitcoin mining farm, their job is to generate these cryptocurrencies, albeit in a different way.

We must keep in mind that there are many different mining farms for cryptocurrencies. Similarly, when maintaining a cryptocurrency farm, it is vital to understand that having good air conditioning for the device is key. It is also vital to take care of the mining power provided. Furthermore, we must recognize that there are programs designed to facilitate remote and simultaneous monitoring of the mining hardware.

On the other hand, the market fluctuates Which can also affect the profitability of mining, as well as the cost of electricity and the difficulty of mining networks. 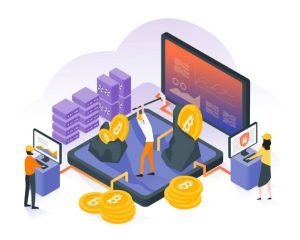 How does Bitcoin farming work?

Do you know where Bitcoin came from? Digital currency, rather than physical currency, has gained prominence in the digital world. Bitcoin does not have a central government because it is autonomous.

The farmers who mine in this network use software to solve basic problems. From this perspective, their services are issued with these digital coins. This has become a platform to earn more rewards and cryptocurrency in a smart way.

All transactions are new models of monetary exchange, and when it is bundled, the blockchain gets the name “blocks.” The blockchain is a vital ledger in which information and details are freely shared and updated without any interference from outside entities.

These nodes help to distinguish between the required bitcoin transactions and attempts to recover the spent coins.

What types of mining sites exist?

First, ASICs are devices designed for mining specific algorithms. In this way, they are certainly more efficient and powerful mining farms compared to other types of mining hardware. ASICs are the most used devices in bitcoin farms, although they are also widely used to mine other cryptocurrencies such as bitcoin cash, litecoin, or dash.

Similarly, GPUs are designed to handle graphics, but because they are powerful and versatile, they are also the devices used to mine cryptocurrencies in some instances. Finally, CPUs are less often used today to create mining farms, although there is potential to monetize these tools in this part of the industry.

How to become a bitcoin farmer or miner?

Becoming a bitcoin miner or farmer is an exciting concept, isn’t it? You can become a bitcoin or any other cryptocurrency miner or farmer yourself. You will need some basic knowledge and a bitcoin expert certification. For farming bitcoins, special hardware equipment is required. To be precise, ASICs (Application Specific Integrated Circuit Chips) are used to mine bitcoins. Standard computers cannot do the job efficiently and accurately.

Here are the steps you can take to get started as a bitcoin farmer or miner:

We discussed bitcoin farms and how the bitcoin mining farms work. Also, the steps you can follow to be a part of bitcoin mining. In this world of digital transformation, blockchain technology is increasing opportunities for operators. So, to become part of the blockchain ecosystem, you can become a certified bitcoin expert or a bitcoin financial advisor. To do so, check out the blockchain certification at the Blockchain Council and get a head start on your career.