According to the latest data sent out by Arcane Research on June 22nd, we can clearly see that in the four months since the start of 2022, public Bitcoin mining companies sold 30% of their mining production, which tripled in the following month, from which it can be seen that further growth is expected in June.

Public miners hold 46,000 BTC, accounting for 20% of the network’s total computing power and their selling behavior often reflects the sentiment of the vast majority of private miners. In the time to come, if they continue to sell in the next time. it may further push Low Bitcoin price. 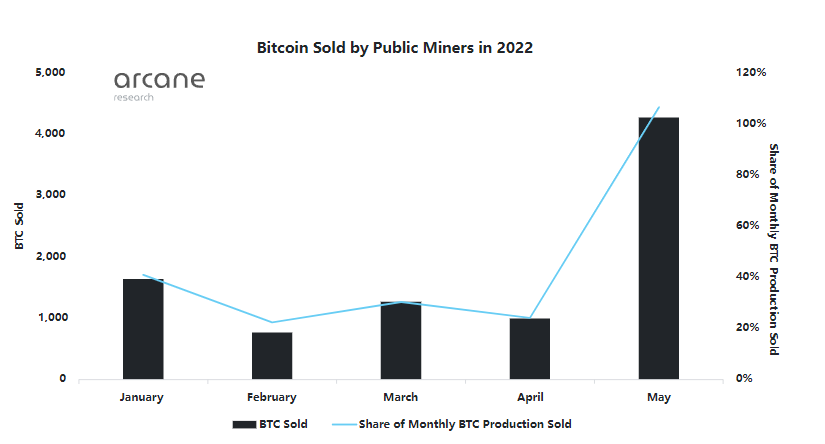 Binance.US, one of the world’s largest cryptocurrency exchanges, will soon offer zero-fee trading for Bitcoin in four spot market pairings: BTC/USD, BTC/USDT, BTC/USDC and BTC/BUSD. Surprisingly, it can also convert one cryptocurrency to another at zero fees, as well as use an over-the-counter (OTC) portal with zero fees.

Why have mining machine prices dropped as well?

Bitcoin has traded at a plummeting price, trading as low as nearly $17,000 and down more than 60% so far this year, while the price of the most efficient miners has fallen by a relative 40%. And there are two main reasons for this phenomenon:

So from these two points it seems that when the Bitcoin price continues to fall, some miners will choose to unplug or even just liquidate their Bitcoin mining hardware due to lower profits, which will have an impact on the selling price of miners.

If Bitcoin prices drop by a small amount, this may not affect the vast majority of miners. However, over the past few weeks, Bitcoin has continued to fall, which has not only put a psychological strain on miners, but has also been forced to sell hardware to raise the required funds due to the lower profits generated.

Of course, if the Bitcoin price rises and miners find that mining revenues continue to climb, it also motivates miners to continue buying new machines. While each upward and downward market movement does not occur for such a long period of time, it is, in general, a motivation for their behavior to occur.

Is it time to buy a miner?

Based on the recent trend of Bitcoin prices, it is impossible to predict exactly how far it will continue to fall and at what point it will rise.

If it falls further, it will surely trigger more miners to sell and more machines to appear in the market. In this case, if you want to continue to develop, miners who still have expectations for the future can actually make corresponding purchases. After all, the indicator of the price of mining hardware is usually the Bitcoin price.