Where you live can affect the profitability of your bitcoin mining operation, so it’s vital to know the cost of electricity where you live. In today’s article, we are going to talk about and analyze global electricity prices.

Electric prices vary around the world depending on a series of factors, for example, access to natural resources and government subsidies, which also affect the cost of running energy-hungry computers known as Bitcoin Miners.

One of the most efficient miners, the Bitmain Antminer S9, consumes 1350 watts while operating. This is equivalent to the amount of electricity consumed by a hair dryer on its maximum setting.

Bitcoin Mining Devices
Unfortunately, bitcoin mining isn’t as simple as plugging something into the wall and letting it run. If you plan to get involved in bitcoin mining, you’ll need additional kit in addition to ASIC mining equipment, depending on your situation:

Some bitcoin miners will choose an Immersion Cooling device to solve some of those above. For instance, Box Technology immersion cooling. It is mainly used for server cooling in the process of work. It adopts a self-developed immersion cooling system to improve the cooling and heat dissipation of the server in a more effective way.

The average electricity cost to mine 1 BTC across all countries is $7,295. Both Canada and the US have electricity costs that are more than $2,000 below the average. What’s more, in today’s market, where 1 bitcoin earns over $10,000, the high electricity prices can justify the returns.

It is worth noting that this study only surveyed 111 of the 195 countries on Earth. Countries not colored on the map represent countries that did not participate in the study. (data from Dieter Holger ) 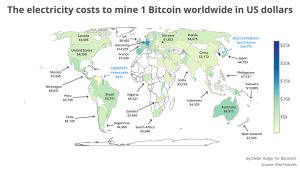 The country with the highest electricity cost for BTC mining was South Korea, at $26,170 per bitcoin. Bloomberg reported last year that the country’s soaring electricity prices due to tariffs have caused many households to pay more for electricity than factories.

The cheapest country to mine is Venezuela, at just $531 per bitcoin. The socialist South American country is the only one to reach triple digits, in part because of its heavily subsidized electricity prices.

Will Miners Get Cheap Energy?
The price of the energy involved in mining BTC has been a hurdle. Some miners are cutting costs by using renewable technologies such as solar panels.

What do you think about the impact of different global electricity prices on BTC mining? You can contact with us via info@boxtechy.com to let us know.